A defining characteristic of Twitter has long been the 140 character limit. A challenge for many to create a cohesive story, users frequently turned to numbered tweets, external links, and smartly edited graphics to convey their points across this platform. When Twitter announced a switch to 280 characters for all on Nov 7th – everything changed. 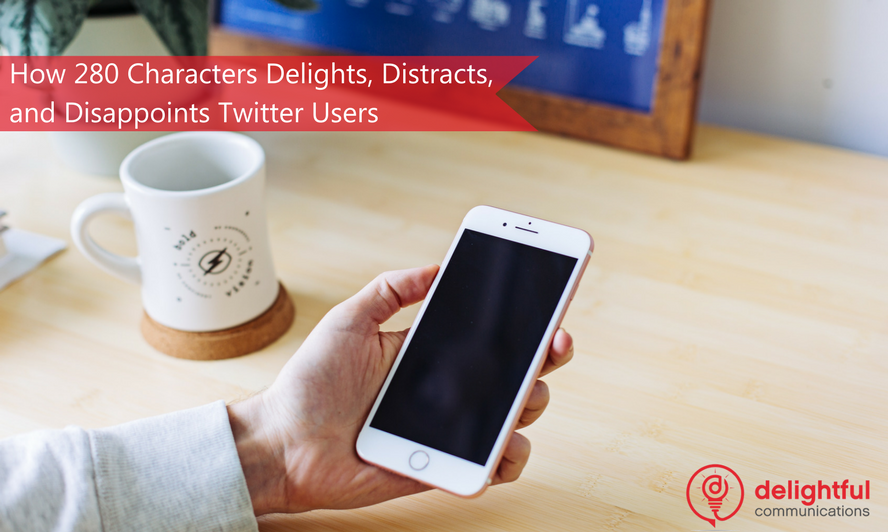 As Twitter rolls out 280 characters to all users, reactions have ranged from outrage to excitement. As Twitter staff explain:

This is a small change, but a big move for us. 140 was an arbitrary choice based on the 160 character SMS limit. Proud of how thoughtful the team has been in solving a real problem people have when trying to tweet. And at the same time maintaining our brevity, speed, and essence! https://t.co/TuHj51MsTu

Many people are having fun with this newly extended character count, but what effects might this lengthier prose have long-term? Some possible consequences include:

While many of these features are being applauded, some have concerns that this increased character count may not be beneficial. For organizations that have limited social media staff, Tweets are often broadcasts of information with limited interaction. This extra length simply shares more without increasing engagement.

Others have concerns about clogged newsfeeds as brands take these characters to the extreme. In lengthier social media such as Facebook and LinkedIn, short posts still generally perform better than longer posts, so many people wonder if this length will have any marketing benefit. And finally, many people embraced 140 characters as the thing that made Twitter unique. Losing this trademark leaves less difference between Twitter and other media platforms.

And apparently, “the circle” is pretty unpopular with users too.

At Delightful our team has been weighing in on some of the best, worst, and most amusing tweets to hit the #280characters. Kate and Kylee have listed some standouts below.

Admittedly, this one gave us a giggle. From a marketing and information perspective, this doesn’t provide much value. Also, who wants to hear MORE sirens?

In the criminal justice system, sexually based offenses are considered especially heinous. In New York City, the dedicated detectives who investigate these vicious felonies are members of an elite squad known as the Special Victims Unit. These are their stories. *DUN DUN*

DUN DUN! You all know the story. Detective Olivia Benson is part of a select team of do-good police that combat the lowest of the low sex offenders in New York City. Here’s their story.

Delighted – The National Center for Missing and Exploited Children

#MISSING Ny’ena Allen, 17, was last seen on June 2nd, 2017 in #Virginia Beach, VA. She is believed to be in Virginia Beach or Norfolk, Virginia. If you have any information of Ny’ena’s whereabouts, please contact @VBPD or call 1-800-THE-LOST #280characters https://t.co/WLfbmbJI5Z

While not as amusing as some others, the National Center for Missing and Exploited Children provides an incredibly important service. The addition of 280 characters allows them to provide better, and more accurate descriptions than the limiting 140 characters of times past. Details can now include last seen and suspected location info, instead of cramming all items into an abbreviated graphic. And please, if you have seen Ny’ena please contact 1-800-THE-LOST.

Google Maps stayed on brand with the allusion of travel to your destination. However, the use of most of the extra characters went to spacing. Instead of just catching your attention by being slightly longer and appearing as larger on the timeline, it crossed the line to ‘annoying’ when you must scroll so far to read and get to the end of the tweet.

Adult Swim used another popular method of those checking to see if they indeed had 280 characters: repetition. While somewhat funny, and true, it doesn’t really add anything to their brand.

Nasa’s Goddard Space Flight Center used two strategies popular so far with the use of 280 characters: spacing and emojis. The use of emojis make the tweet visually appealing without using an actual photo and the spacing they used draws attention to their tweet as it takes up a bit more of the timeline, without taking up too much of your timeline. The text, along with the use of extra spacing, cleverly ties into their brand and does so seamlessly. Plus, it has the vague feel of a Dad joke, which the internet loves.

So, what does all this mean for marketers?

Just because you have 280 characters on Twitter, doesn’t mean you need to use them all. You don’t need to add irrelevant hashtags because you have the space, research backs increased engagement for hashtags with one or two hashtags, not ten. Making tweets longer may catch users attention at first, but these bloated tweets are likely going to annoy users and many will easily learn to scroll past these in time.

You have a bit more wiggle room now, but be sure to test what works best for your audience. As always, make sure you’re keeping your thumb on the pulse and watching out for how users are responding to the change.