Branding Mistakes: How to Own Them and Take Responsibility

Developing your personal brand and sharing your story is wonderful when things are going well, but what happens when things go wrong? Perhaps your career was affected by a colleague’s gossip or your stellar product launch was closer to a fiery inferno. Your Amazon seller reviews come back not only poor but also mocking. Maybe your personal information got shared publicly, or disaster strikes and your service is disrupted.

It’s not a matter of if something bad will happen, but when. How you handle these troubles can be a tipping point that makes or breaks your brand. In the face of adversity, here are some things to remember. 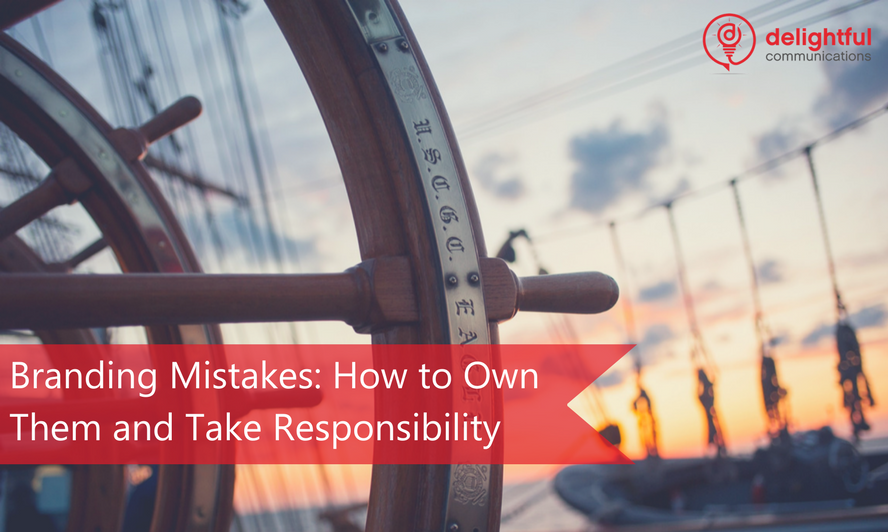 An excuse is not equivalent to an explanation—and no one wants to hear it. Describe what happened and own the error. Don’t pass the blame along to a third party. By admitting that a mistake was made you demonstrate honesty and integrity. You may be surprised at just how empathetic your audience may be towards human error.

And in some cases, you may find a delightful upside to your mistake.

Ramona and the Cats

Take Ramona and the cats. On October 2nd, NPR published a mysterious post about Ramona and her love of cats. Realizing the error very quickly, social media editor Christopher Dean Hopkins retracted the post, leaving the original link with edited text stating that, “This post was intended for a personal account. We apologize for the error.” What happened next surprised everyone.

The audience wasn’t upset about the mistake, they were upset that Ramona was gone. #BringBackRamona started trending in a story larger than its original content. Readers felt the mistake demonstrated the staffer’s humor, made everyone smile, and even displayed Hopkins’ language skills. A story only 12 minutes long turned out to be a highlight picked up by the NY Post.

Not every mistaken tweet is all cats and babies. Red Cross employee Gloria Huang had a misstep while balancing personal and professional accounts across marketer favorite Hootsuite. Under the professional Red Cross account, she sent, “Ryan found two more 4 bottle packs of Dogfish Head’s Midas Touch beer… when we drink we do it right #gettngslizzerd” While “getting slizzerd” sure sounds interesting, it’s perhaps not an asset for disaster relief and first aid. To its credit, Red Cross provided a timely response and managed to laugh a little at its own expense.

We’ve deleted the rogue tweet but rest assured the Red Cross is sober and we’ve confiscated the keys.

Thank you, Red Cross for promoting safe and sober driving.

McDonald’s and the Szechuan Sauce

A McNugget dipping sauce revived from the ages by the ultra-popular cartoon Rick and Morty, McDonald’s offered the sauce in one-day-only limited quantities. Fans lined up around the block for this ultra-rare condiment experience to visibly poor results. Restaurants offered limited quantities of 20 packets or less, and some ran out before the advertised event time. eBay sellers were reselling the coveted sauce packet for hundreds of dollars. McDonald’s apologized.

Going beyond a simple, “I’m sorry,” the brand listened to their angry audience and made changes. On October 9th, just two days after their failed promo the corporate giant announced their solution—they were bringing the sauce back, for real. Emphasizing every aspect of brand ownership the company thanked fans, apologized, acknowledged complaints, then provided a realistic solution to the problem.

Learning from the examples of others can provide valuable knowledge and insight. Sometimes that insight comes in the form of what “not to d”. In this example the consequences have reached far beyond reputation, leading to discussions involving civil and legal proceedings as well as termination of employment.

Many people are familiar with the United Airlines incident that resulted in the violent and bloody removal of a passenger in April of 2017. This was a mistake by both local authorities and airline staff, but that’s not how United tried to spin things. Airlines representatives rushed to digital media to issue a statement before fully investigating the situation.

Note that @united‘s apology is for overbooking a flight not for initiating a bloody assault on a paying customer. This is how not to do PR. pic.twitter.com/ezCiGrYr3T

While there are obvious legalities involved in admitting fault, it is never necessary to shift the blame or change the subject. Critics have lambasted airline executives for first issuing a “non-apology” and then proceeding to blame the victim. By the time United finally issued a true apology it was round three and the damage had been done. It would have been far wiser report on the known facts and admit the company needed more information.

The Cardinals also had a terrible incident. Baseball is supposed to be America’s pastime and a family-friendly event. This image is as much a part of the game as the 7th inning stretch and peanut shells, and when fan safety is threatened it can cause lasting brand damage.

Recently reports of a fan being hit by a stray bullet while enjoying the game made headlines. The Cardinals quickly responded to the incident to acknowledge what they did and didn’t know, working to reassure fans that their safety mattered.

We are aware of an incident last night in which a fan reported being struck by a stray bullet that presumably originated from outside of the stadium. The fan was treated for an abrasion and a bruise on her arm at First Aid and released. She was interviewed by police who are investigating the matter. There is nothing more important than the safety of our fans, and the Cardinals are grateful that no one was seriously injured. We will be sharing more information with the media as further details emerge. via CBS Sports

Once you have posted your initial response acknowledging the situation, follow up with the facts. Explain what happened and then detail the actions you have taken. Examples of great follow-ups can be found with both KitchenAid and Tesco for social media crisis response at Business2Community.

Mistakes happen. You cannot control everything, but you can control your response.

When developing your brand strategy, remember that bad things can and will happen. How you respond to these incidents can often affect public perception of your brand as much, or more than the initial incident itself. Take responsibility for your mistakes and maintain transparency of the incident when possible.