Future of Virtual and Mixed Reality and Marketing with Robert Scoble

When I started my career at Microsoft over a decade ago, my colleague at the time, Carolyn Miller, suggested I read a book about blogging called “Naked Conversations” by Robert Scoble and Shel Israel. 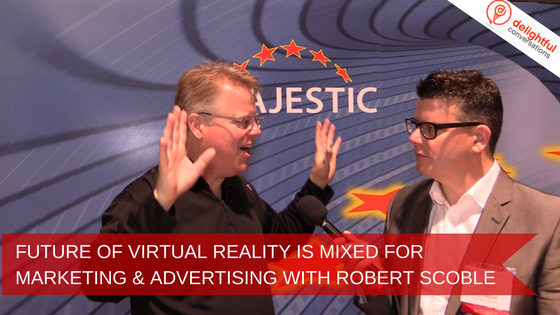 I can safely say that book changed my life.

My initial role at Microsoft was as a Pan-European Search Specialist helping to launch Microsoft adCenter (now Bing Ads) but after a while, I was tapped up for a community role to help advertisers “help themselves” by creating and disseminating useful content on blogs and forums.

This was in a day (can you remember?) before Twitter and Facebook and Naked Conversations was the go-to tome for understanding the power of blogging and was very much a precursor for what we now know as content marketing.

Fast forward a decade and I get to introduce Robert Scoble on stage at Pubcon in Las Vegas last month so he can wow the crowd with his next big early-adopter thing: virtual and mixed reality!

And then he graciously agrees to an interview…

During our Delightful Conversation, Robert explains that mixed reality is “the next wave” after virtual reality and by the end of 2017, for instance, everyone who buys an iPhone 8 will get a virtual reality headset to play around with  immersive experiences because they will be ubiquitous.

He talks about Microsoft Hololens (he’s very excited what Microsoft are doing in the space) and says right now the equipment is “big and dorky” but in the next 3 years, we’ll see pairs of glasses (Spectacles anyone?) where users can look into a shopping mall and shop for stuff.

Advertising and marketing is going to change too. Soon we’ll see 5 pictures to tell us where the best nightclubs are if we’re on a trip in Vegas. Devices will send signals to the cloud and be a virtual component of a company’s brand which will be able to articulate itself through those devices.

We then talked a little about his personal brand and how he got to be where he is by finding platforms like his blog and Facebook page to talk about the stuff he loves and how he has a keen eye on understanding might be the future, before going back and hearing a ton more about what’s going to be possible when VR goes mainstream.

There’s no denying Scoble’s enthusiasm when it comes to all this stuff. His excitement is infectious and he gave a really great talk at Pubcon so I hope he got some fellow marketers thinking about how they can use this kind of technology to create authentic, useful, relevant and actionable experiences for their brands.

I’ve tried VR, it’s incredible and it’s only going to get better.

Thanks to Robert Scoble for taking the time to chat and to the Pubcon crew for allowing me to interview other keynote speakers from the event like Scott Monty and Scott Stratten!

Next up >> wisdom from Ann Handley recorded at the Digital Summit in Raleigh and published in a couple of weeks!