Martin Luther King and the Power of Personal Branding

Martin Luther King Jr. has sustained a legacy well beyond his passing. Efforts to honor him with a national holiday were visible just four days after his assassination, and educational institutions and public landmarks continue to celebrate his character today. In fact, last Monday you may have even seen him positioned as a marketing strategy among brands. 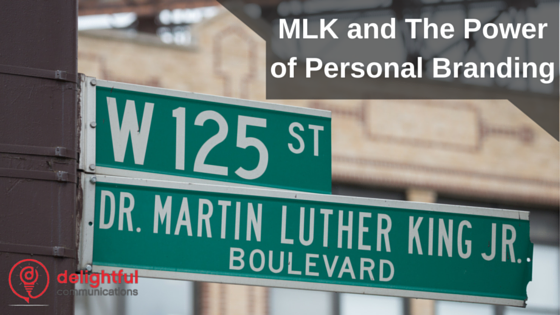 Evident is not simply the remembrance of a humanitarian and visionary leader in the civil rights movement, but a persisting touchstone for justice and activism in our world today. Yet by no means did MLK act alone. Critics such as Ella Baker – another renowned civil right activist – has even gone so far to assert that Martin did not make the movement. Rather, the movement made him. So how exactly did Martin gather a crowd of over 250,000 supports and share his vision on August 1963?

His charisma generated enthusiasm and his public relations skills allowed him to present an issue as a moral wrong demanding action. His call for nonviolence made him more impressive to observers. And gradually, King established the nonviolent philosophy for which he was later coined.

While the term personal branding is more widely used in the contemporary influx of digital, new media and technology, MLK is a historical and influential figure who illustrates to us that personal branding has been around for generations!

Tactics Mr. King utilized to shape his brand and legacy include:

He had a message to the world about social justice and even if campaigns failed or criticism rose, the broader message never wavered.

Branding has reshaped the everyday world we live in. No longer are products and commodities simply the products themselves. Rather, they represent lifestyles and ideas with the power to influence.

MLK captures the features of a well-constructed personal experience and story.

He is discoverable, sharable, and memorable – highlighting the power of the personal brand.